Korean “aegyo sal” makeup is making a comeback in 2022 – here’s how you can create wider, brighter-looking eyes “Aegyo sal” makeup has been the ideal makeup style, right next to a sultry Ariana Grande cat-eye, for a long time now.

But whilst aegyo sal – which refers to the little pockets of fat under the eye – makeup used to put all the spotlight on the “under-eye fat” using strong contours and concealer, it’s taking on a fresh new style in 2022. 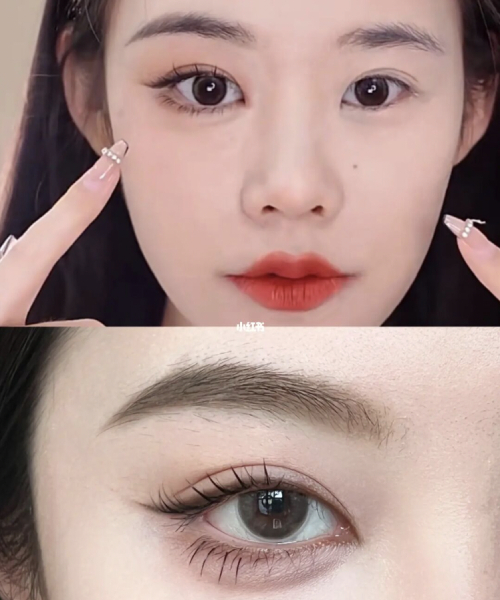 Besides accentuating the pocket of fat under the eye, aegyo sal makeup also emphasises wider and brighter-looking eyes.

Users on the Chinese social media platform, Xiao Hong Shu, have been particularly expert at creating this new, wide-eyed aegyo sal makeup. Instead of tracing the lower lash line with eyeliner, they’re leaving a space under the eyes to make them look even bigger. 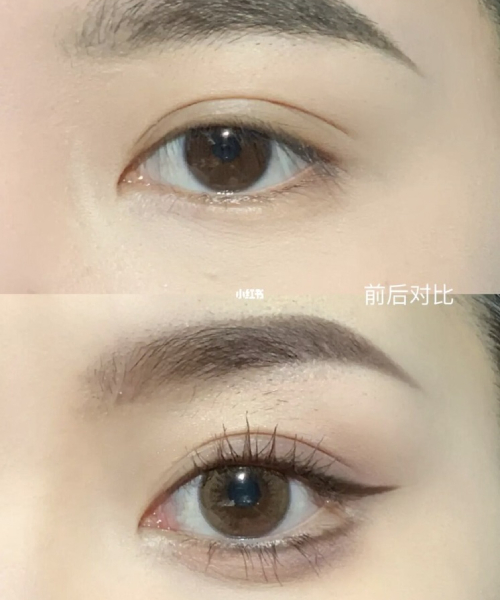 They’re also using a soft, milk-tea-brown shade to draw a curve under the aegyo sal: a steeper curve for rounder-looking eyes, whereas a flatter one for an illusion of length.

To really emphasise the eye’s length for a slightly edgier – though still youthful – look, they’re also attaching false eyelashes along the straight-winged liner, which extends the length of the eyes for a more cat-eyed twist on the aegyo sal makeup. 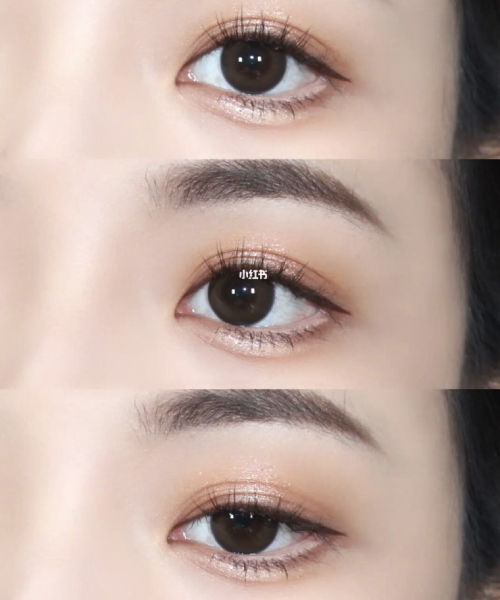 So, there’s no need to choose between a sultry Western cat-eye and a Korean puppy-eyed makeup look. Instead, you can have the best of both worlds with this comeback aegyo sal makeup that features youthful “under-eye fat” in bolder style.

Read on for our aegyo sal makeup tutorial and Xiao Hong Shu-approved tips, all below!

Since aegyo sal makeup today doesn’t just put the spotlight on the “under-eye fat” but also on longer, wider eyes, sweeping on eyeshadow is a great way to start.

The key is to create the right shapes using your eyeshadow – the contours and shadows can help to widen the eyes and give an illusion of length.

For the simplest eyeshadow base, start by using a cotton swab or pair of tweezers to press underneath your brow bones. This is just to help you gauge where it is, so you know where to apply your eyeshadow until. Apply a light brown eyeshadow just beyond your brow bones and also extend it past the outer corners of the eyes.

Sweep the eyeshadow onto the inner corners of your eyes and in a narrow ribbon underneath the lower lash line, connecting it all together in a “panda eye” shape. 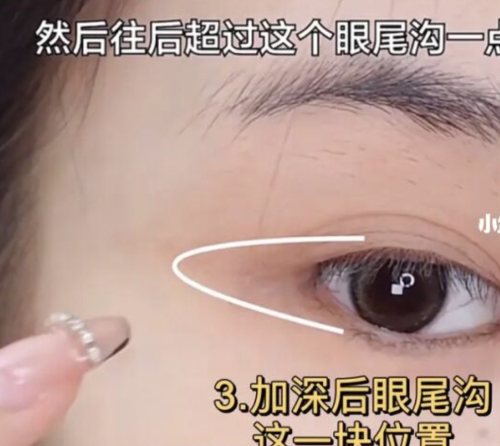 You also want to apply another layer of eyeshadow to the outer corners of the eye (as shown in the photo above).

Draw straight-winged eyeliner instead of a curved one

A straight wing is best for accentuating the eyes in an aegyo sal makeup look, especially when you’re trying to lengthen rather than round the eyes.

Using a waterproof eyeliner, fill in the waterline, before extending it beyond the outer corners of the eye in a straight line.

This is similar to how Blackpink’s makeup artist Maeng does Rosé’s smokey eye eyeliner, and her advice is to tap a waterproof, liquid eyeliner onto the waterline using a brush. She also switches to a gel eyeliner for the wing, for a more natural appearance.

Instead of black, it’s better to use a brown eyeliner that looks less contrasting and harsh on the eyes; it blends out better to create a more effortless, natural aegyo sal makeup style too.

Leave a gap when lining your lower lash

Here’s where the Korean puppy-eyed makeup style really makes a comeback in style.

Users on Xiao Hong Shu leave a gap between their lower lashes and the eyeliner line instead of simply shading in the bottom of the eye following the lower lash. The lower line also widens instead of converges to meet the upper eyeliner, creating an illusion, overall, of wider eyes.

Start drawing the lower lash line aligned with the inner edge of the pupil (around one-third of the lower lashes) and extending it outwards in a very gentle curve – almost like a straight line.

Outline the lower edge of your “aegyo sal” 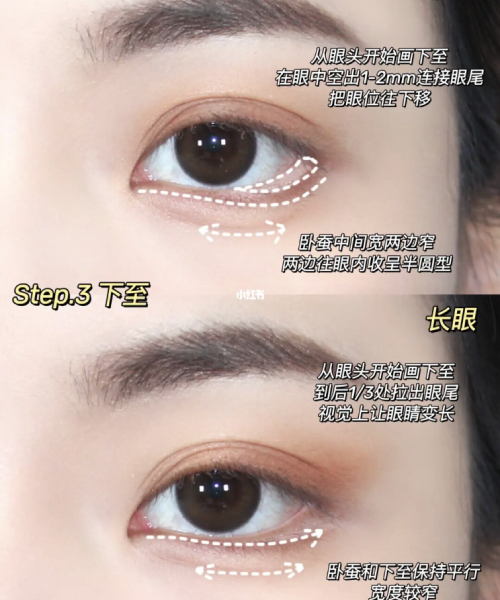 To emphasise the aegyo sal, users also outline the lower edge of the “under-eye fat” with a lighter brown shade.

How? You can start by drawing the lowest point of the curve at the centre of the eye, and then extend it on both sides with a steeper upward slope. The lower edge of your aegyo sal doesn’t need to be completely parallel to the eyeliner. 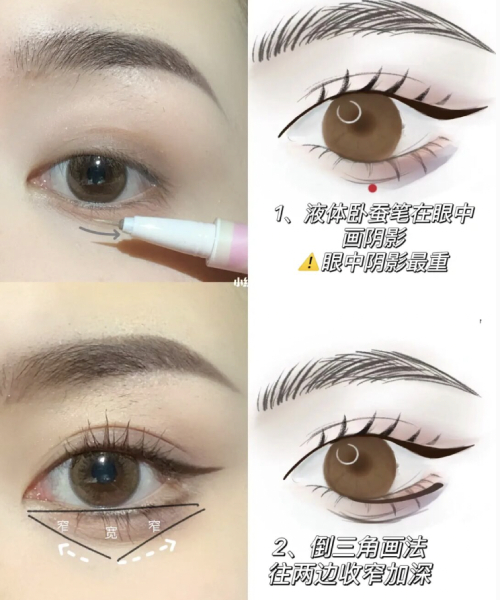 Xiao Hong Shu user, @崔草仙儿, suggests using an imaginary triangle as a guide; you can draw the slopes following the two sides of the triangle. This makes the aegyo sal look rounder and plumper, rather than wide and flat.

However, if you prefer your eyes to look even longer, then flatten the lower aegyo sal curve to follow your eyeliner’s curves.

Add a touch of shimmer to your “aegyo sal” 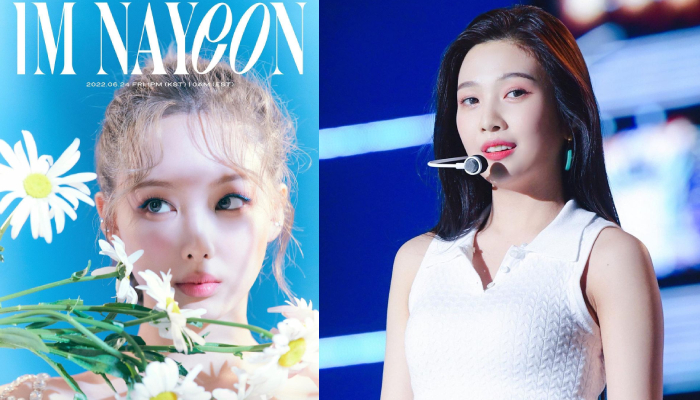 K-pop idols like Twice’s Nayeon and Red Velvet’s Joy are often spotted wearing aegyo sal makeup with a touch of shimmer to brighten their under-eyes. It’s no wonder that users on Xiao Hong Shu are also following suit by applying pearlescent eyeshadow to their aegyo sal, eyelid, and inner corner of the eye. 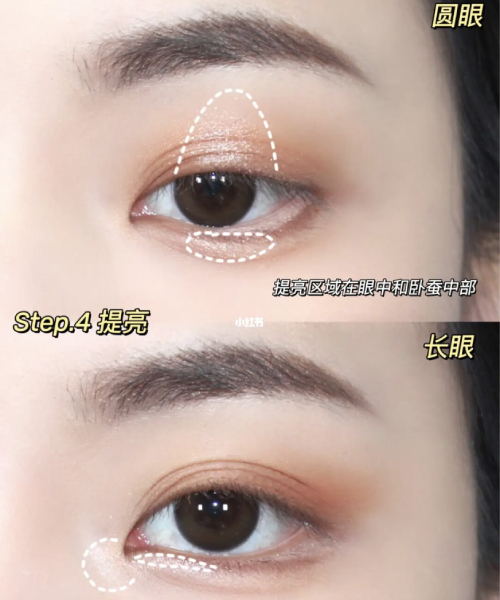 For an illusion of length, add the shimmer to the inner part of the aegyo sal instead; you can pair this with a hint of shimmer at the inner corner of the eye. This lengthens the eye rather than rounds it, unlike the first method.

For greater length: Place false lashes along your eyeliner wing 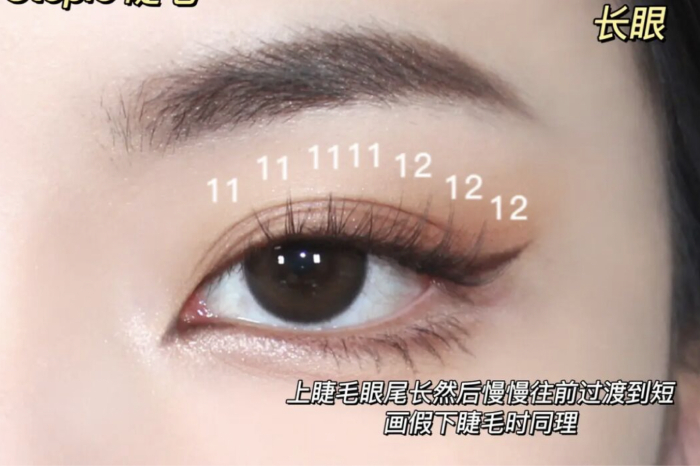 An aegyo sal makeup style doesn’t always have to be puppy-eyed; you can also wear a fiercer, edgier look whilst still showing off youthful “under-eye fat”.

Should you want to wear a bolder aegyo sal makeup style, then apply false eyelashes along your eyeliner wing (instead of stopping at the edge of the eye) so that your eyes look longer and more cat-eyed.